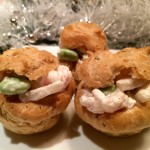 Toasted Sesame-Shrimp-Edamame-Puffs
Shrimp filled puffs have been a staple at my family's gatherings. I've given them an update by adding edamame and water chestnuts to add color and texture. I've also added a blend of toasted sesame seeds and sea salt called Gomasio to my puff dough to give a taste of the Orient.
Ingredients
Servings: appetizers
Instructions
Share this Recipe
Powered byWP Ultimate Recipe

This site uses Akismet to reduce spam. Learn how your comment data is processed.